The Angolan central bank’s monetary policy committee (MPC) recently hiked the country’s benchmark interest rate from 15.5% to a record of 20%. The largely unexpected hike, which is one of the National Bank of Angola (NBA)’s attempts to curb inflation, marks the first time the benchmark rate has been increased since November 2017.

According to a Bloomberg report, the MPC was compelled to bring forward the meeting that ultimately sanctioned the rate hike due to an “evolution of the main indicators.” These indicators, according to the NBA governor, Jose de Lima Massano posed a threat to Angola’s growth trajectory. He explained:

The spread between inflation and the interest rate has been growing wider since the beginning of the year. Current data indicates additional inflationary pressures, which may put at risk the central bank’s inflation target of 19.5% for the end of the year.

As the data from Angola’s Instituto Nacional de Estatistica shows, the country’s year-on-year inflation has been on an upward trajectory since December 2019. For instance, in December 2019, the inflation rate stood at 17% yet by March 2021 it surpassed 26%.

As the data also shows, Angola’s year on year was only previously above the 26% threshold back in December 2017. The data appears to suggest that unless the NBA acts, Angola’s inflation rate will likely continue to surge and it may possibly reach the December 2016 high of 40%. 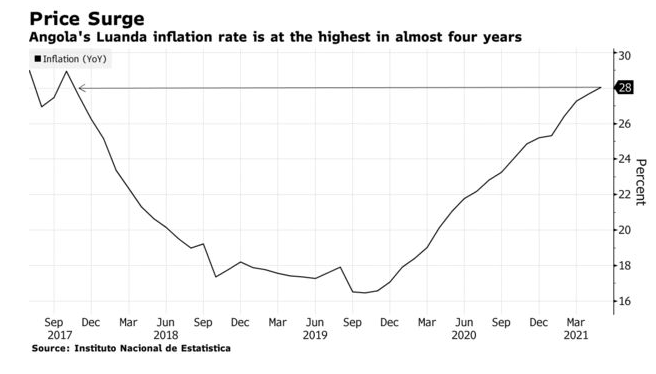 Meanwhile, the Bloomberg report quotes Tiago Dionisio, an analyst at the Lisbon-based Eaglestone Advisory SA, explaining that while the decision will have an impact on the economy, the NBA is more worried about the stability of the local kwanza currency. He said:

(The decision) shows that the central bank is more concerned about the current inflation trajectory and in maintaining the kwanza exchange rate stability.

In the meantime, the report notes that these changes still need to be gazetted before they become law.

Are interest rates hikes the best way to tame inflation in emerging economies? Tell us what you think in the comments section below.