Establishing The Architectural Styles Of Bitcoin

A Suggestion For The Sats Symbol

What are CC0 NFTs, and why are they important?

Jeff Koons Will Launch NFT-Backed Sculptures to the Moon

NFTs are changing the way photographers create and market content 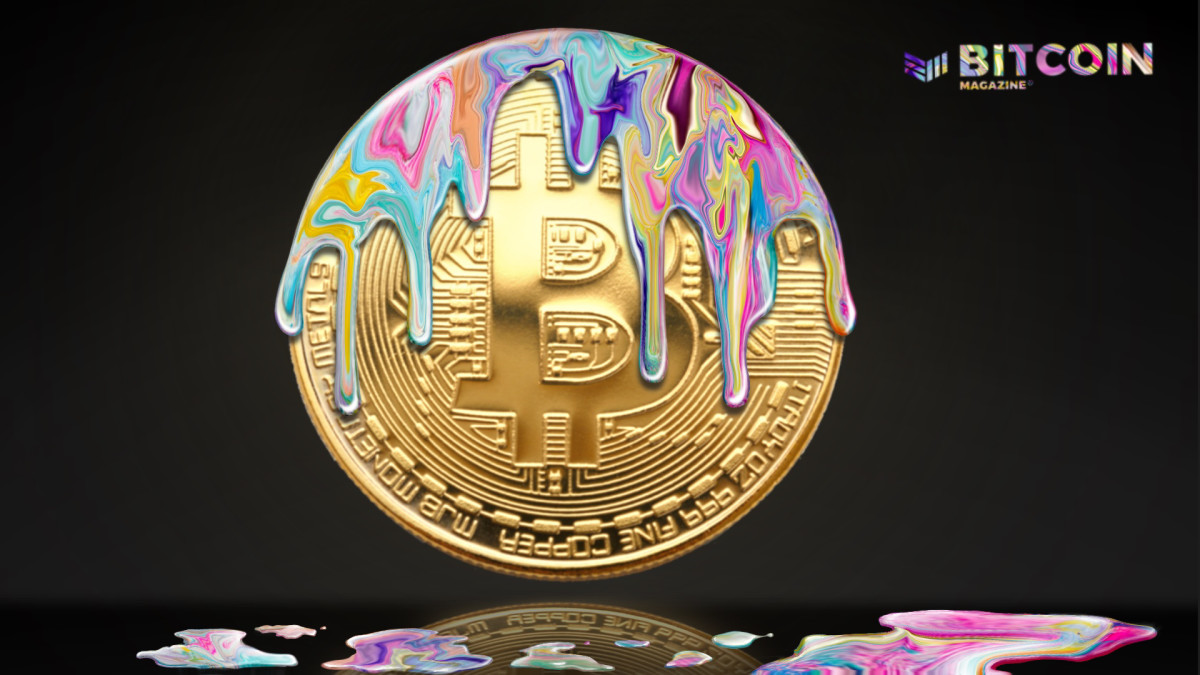 Rule VIII: Add Bitcoin Artwork to Your Life to Make It As Beautiful As Possible

A REIMAGINATION OF “BEYOND ORDER” BY JORDAN PETERSON THROUGH THE LENS OF BITCOIN.

This writing mirrors the exact chronological structure of Beyond Order offering reflection through a Bitcoin lens. This is chapter 8 of 12. If you read the book it adds a second dimension. All quotes credited to Jordan Peterson. All reflections inspired by Satoshi Nakamoto.

Cleaning Your Room Is Not Enough

“Making something beautiful is difficult, but it is amazingly worthwhile. If you learn to make something in your life truly beautiful — even one thing — then you have established a relationship with beauty… That is an invitation to the divine.”

“If it is a genuine artistic production, it will invade your life and change it.”

Bitcoin is the original, the immaculate conception. It is a genuine artistic production that is invading our lives and changing them. There are many pretenders attempting to siphon your money and attention. Be careful what you allow into your life, enabling the wrong product to invade your life will change it for the worse. The consequences of incorrectly allocating your time and money are dire. Simply knowing Bitcoin exists teaches you, whether you choose it or not. Time is the ultimate scoreboard, and Bitcoin is time. That is the power of a genuine artistic production.

Bitcoin’s design is striking: elegant, simple, powerful. Transcendent works speak to something deeper within us. Real art leaves us speechless because the way it makes us feel we lack the words to fully convey to do it justice. These qualities make it timeless. And Bitcoin will be a conversation piece for programmers, poets, journalists, and artists alike for decades to come. Once you think you’ve figured it all out a series of new paths take you deeper. We start by answering “what is Bitcoin,” mature into explaining “how Bitcoin works,” then graduate into “why Bitcoin matters.”

And the deeper your connection to this transcendent force, the more likely you will have the strength to prevail when the market correction becomes daunting. HODLers don’t flinch in an -80% fiat correction because our belief is anchored by the knowledge that there is no better alternative. Glassnode’s HODL Waves show the conviction of long term HODLers who set the new floor with each halving cycle.

“Perception has been replaced for me with functional, pragmatic memory. This has made me more efficient, in some ways, but the cost is an impoverished experience of the richness of the world.”

Society teaches us to trust data over our own feelings. So we lose our instincts as we age. We focus on what’s factual rather than subjective. Life narrows human effort into streamlined operations seeking maximum speed and lowest cost. But in this race to the bottom, we end up with an impoverished experience of the richness of the world. The Bitcoin community shares core beliefs yet expresses them on a spectrum of form factors adding dimension and richness.

“… left as we are with the pale reflection of our surroundings that our increasingly restricted mature perceptions deliver to us.”

Older generations are calloused in their ways, often perceiving Bitcoin with apprehension when in reality they are holding a dollar-based bag that is a pale reflection of its former glory.

“… museums, those asylums for genius: we isolate everything that is great — everything that could in principle be distributed throughout the world. Why cannot every small town have a shrine devoted to one great piece of art, instead of having every piece collected in a manner impossible for anyone ever to take in at once?”

Each of us is unique but society makes sense of us not as individuals but as a collection that fulfills various roles. Rather than try to cage all the talent in a centralized place wouldn’t it make more sense to decentralize talent and enable each to shine uniquely in its own space? Bitcoin allows people to contribute without geographical concerns. Developers, nodes, coin holders, and miners all operate throughout the world. And each Bitcoiner has a unique perspective to bring to the table. If money is sane it may just give us all a chance to breathe and remember what it is to be uniquely human rather than cogs in a centralized machine.

I deeply believe each Bitcoin pleb has one great piece of artwork within themselves if only they had the courage to take it upon themselves to let out. Your “you-ness” is not meant to be bottled up and sat in a cubicle from 9 to 5. It’s no wonder we feel like sardines in the office, each person elbowing their way up the ladder often forced to step on others in said mission. The future that Bitcoin offers is unclear but there are pathways ahead that will reward individuals for being individuals. That is something the internet era has shown is possible. But the vast majority of people make their living by being disgruntled middlemen when in reality we all wish to devote our lives to one great act unique to ourselves that nourishes our soul. I may be swinging for the fences but I believe Bitcoin opens that door for many millions of people.

“Artists are the people who stand on the frontier of the transformation of the unknown into knowledge. They make their voluntary foray out into the unknown, and they take a piece of it and transform it into an image.”

By this definition all Bitcoiners are artists. We are frontiersmen venturing boldly into the unknown in an attempt to define the future. This is why we are often misunderstood by normies. The general population sees crazy people taking outsized risk beyond society’s comfort zone. If you are a Bitcoiner who feels misunderstood you are not alone.

“That edge, where artists are always transforming chaos into order, can be a very rough and dangerous place. Living there, an artist constantly risks falling fully into the chaos, instead of transforming it.”

No-coiners are rightfully fearful of Bitcoin. It represents precisely a rough and dangerous frontier land. It has been said that when explorers of old reached the edge of their known map the common saying was “here be dragons.” Bitcoiners stand at the edge of monetary chaos in an attempt to transform it into something better.

“That is the role of the artist, occupying the vanguard… They are the initial civilizing agents… The artists do not understand full well what they are doing. They cannot, if they are doing something genuinely new.”

Bitcoiners may seem like cowboys to the rest of the world but we recognize ourselves as the initial civilizing agents. We are all attempting to reconcile the old with the new but we do not understand full well what we are doing because this is uncharted territory for every living human. No one in our lifetime has witnessed the reinvention of money.

“Artists must be contending with something they do not understand or they are not artists.”

Everyone daring enough to create on Bitcoin is contending with something we understand but don’t understand and that takes artistry.

“They are likely, when genuine, to be idiosyncratically and peculiarly obsessed by their intuition — possessed by it, willing to pursue it even in the face of opposition and the overwhelming likelihood of rejection, criticism, and practical and financial failure. When they are successful they make the world more understandable.”

This is what motivates Bitcoiners in a nutshell.

“I can tell you that the art shines through the propaganda as the years pass.”

How many Bitcoin copycats have come and gone? Many replicated Bitcoin’s codebase promising something better but few have stood the test of time. And after 12 years there is still only one Bitcoin. And the “next Bitcoin” will be Bitcoin.

“We need the new, merely to maintain our position.”

Step back and consider the bigger picture. Fragmented groups in America are at one another’s throats. China is at full force breathing down our neck. It is not enough to simply stand in place or redistribute wealth without. We need to revitalize our society to maintain our position. It isn’t enough to just tax money from one group and give it to another. We need a new mindset, and Bitcoin is capable of delivering.

“… when impressionists first displayed their paintings… the pieces were met with laughter and contempt. The idea of perceiving that way… was so radical that it caused people to have emotional fits.”

When you have something that makes people wildly emotional (see Peter Schiff, Nouriel Roubini, Steve Hanke, etc.), that’s when you know it’s a work of genius. It’s ahead of the critics’ time. In the words of Victor Hugo, “Nothing is more powerful than an idea whose time has come.” And Bitcoin’s time is now. Silicon Valley has learned that special products originated from highly divided opinions. Ideas that are too agreeable are usually too obvious. The genius ideas are often met with deeply polarizing responses.

“Artists teach people to see. It is very hard to perceive the world, and we are so fortunate to have geniuses to teach us how to do it., to reconnect us with what we have lost, and to enlighten us to the world.”

We lost sound money. Lost in the annals of history are all the known civilizations whose money was debased leading to societal collapse. Americans have strong amnesia so we must be reminded. Bitcoiners are teaching people to remember what took thousands of years for humans to figure out — that sound money is intertwined with societal prosperity.

“Beauty leads you back to what you have lost… forever immune to cynicism… Beauty… straightens your aim. Beauty reminds you that there is lesser and greater value.”

Beauty is in the eye of the beholder. Until Bitcoin came around I never thought I’d describe money as beautiful. But how can it be anything but beautiful once you understand the balance between miners, node operators, and developers; the elegance of Bitcoin’s design; the harmony Bitcoin offers humanity. Any one solution with the capacity to benefit multiple wildly complex social issues is a creation of genius. Bitcoin reminds us that there are greater and lesser forms of value. And most importantly, it sets the bar for the greatest value in our species’ history.

Try to teach one no-coiner in your life “Why Bitcoin.”

This is a guest post by Nelson Chen. Opinions expressed are entirely their own and do not necessarily reflect those of BTC, Inc. or Bitcoin Magazine.