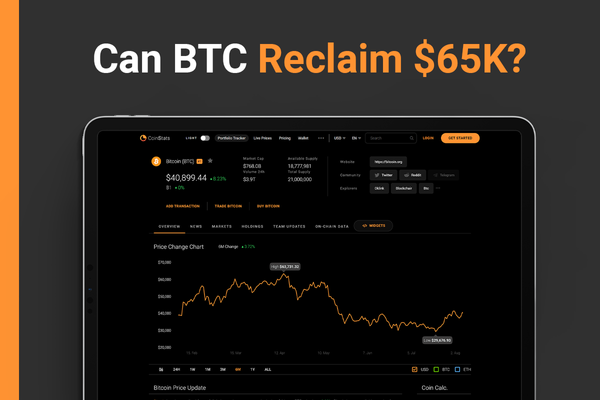 Just as I pen this article, Bitcoin price has closed above $40,000 for the ninth time in the previous three months.

The latest run-up in the world’s leading decentralized digital asset comes back on backheels of one-too-many factors. That includes the August 5’s Ethereum hard fork that, for the first time, brought a deflationary feature on the world’s second-largest crypto by market cap. Meanwhile, other factors include inflationary pressures and fears that the latest Delta variant of the Covid-19 would push economies back into lockdown.

Fear is the primary denominator behind the latest and all the previous rallies in the Bitcoin market. Investors have bought a popular narrative running rounds across the macroeconomic circles: Some significant blundersome inflation is coming soon, which would rob their ultra-billion and trillion dollars worth of reserves off their value.

It is no secret that higher inflation has already arrived. The official US Consumer Price Index number now sits at 5.4%. Meanwhile, the core inflation reading is 4.5%. Both these metrics are at their multi-decade high.

The bosses responsible for designing our monetary policies (read Federal Reserve) are sure that such inflation spikes are transitory; that the higher consumer prices across various industries won’t stay. But they are, at best, cautious in their press dialogues, not sure.

The Federal Reserve Chairman conducted a press conference after concluding their monthly policy meeting with other top central bank officials. He admitted that inflation has run higher than the Fed has anticipated. Nonetheless, to save face, he kept reassuring that inflation won’t stay for lunch.

Here is what Powell said in his most confusing post-policy meeting speech ever:

“The [consumer price] increases will happen. We’re not saying they will reverse. So, there will be inflation, but [its] process will stop. […] If it doesn’t affect longer-term inflation expectations, then it’s very likely not to impact the process of inflation going forward. So, what I mean by transitory is that it does not leave a permanent mark on the inflation process.”

In a newsletter published last month, Alden noted that the Fed chair wanted to say but did not is that inflation is not transitory in absolute terms. I.e., the Fed chair accepted that its ongoing policies would lead to “permanent significant price increases.”

Alden’s noted that the year-over-year inflation fluctuated between highs and lows, thereby appearing transitory (the first chart above). Still, the consumer prices remained at a permanently higher plateau after each inflationary spike. Therefore, inflation kept rising (as shown in the second chart above).

Inflation fears were instrumental in sending riskier assets higher in 2020. Bitcoin itself closed the year at profits of more than 200%.

That was dramatically higher than what S&P 500, Dow Jones, Nasdaq Composite, and gold delivered in total. Investors clearly speculated aggressively on Bitcoin, insofar that their upside bids pumped the cryptocurrency’s value from as low as $3,858 in March 2020 to as high as $65,000 in April 2021.

Indeed, more mainstream companies dipped their feet in the Bitcoin sector, with Tesla, MicroStrategy, and Square adding the cryptocurrency in their reserves as an alternative to the US dollar.

On the other hand, Fed decided to be gracious to the US economy, with near-zero interest rates and $120bn a month worth of asset purchasing. As a result, the public and private debt levels in the US are now relatively higher than the gross domestic product (GDP). Fed wants to run its policies intact until it sees maximum employment. Inflation is not even on their core agenda.

“By the end of this year, the US government will have around $30 trillion in federal debt and rising,” Alden stated.

“For every 1% average interest rate on that debt, they would owe over $300 billion in annual interest. So, policymakers have a strong incentive to keep rates low despite periodic inflationary events that may occur.”

As a result, even a massive 50% correction in the Bitcoin market, led by China’s crypto ban and Elon Musk’s criticism of the mining’s carbon footprints, traders have returned to long BTC/USD near the critical support level of $30,000. Therefore, we now have an asset bouncing in a range, the resistance side held by the $40,000 level.

Investors would keep looking for better yields as Fed’s expansionary policies put pressure on bond yields and push the US dollar’s purchasing power lower. That means they would increase their allocation across the riskier assets, benefiting what appears like a short-term hedge against lower rates and unlimited bond-buying.

That explains why Wall Street indexes have been claiming one record-high level after another. That also explains why Bitcoin is holding $30,000-support religiously despite grave downside sentiments that predict its prices to crash towards $20,000.

Technically, Bitcoin is right now in the busting process of its third-biggest bullish cycle since 2017. The last two saw the cryptocurrency crashing to its 200-week simple moving average (200-day SMA; the orange wave) before resuming its long-term uptrend. As a result, the fractal expects the price to hit at least $14,000.

But with ultra-supportive fundamentals, Bitcoin could resume its uptrend earlier than expected. That includes a bounce from the current $30,000 level or, from $25,000, should the bears take control of the short-term sentiment. Therefore, persisting inflation fears could have Bitcoin crawl back to its next resistance levels at $45,000, $54,000, and eventually $65,000.

As a risk measure, it is vital to watch the Federal Reserve’s upcoming policy meetings. The central bank had clarified that it would hike rates at the end of 2023.

But that solely depends on how the new Delta variant of COVID-19 plays out. So far, the highly transmissible diseases have proven to be deadly for unvaccinated people. But its ability to reimpose masking rules even for vaccinated lots has raised fears of another lockdown.

If that happens, the Fed would need to support the economy for a longer timeframe. Bitcoin could benefit from that.

Why Cryptocurrency Swap Services are Crucial for Crypto Investors?