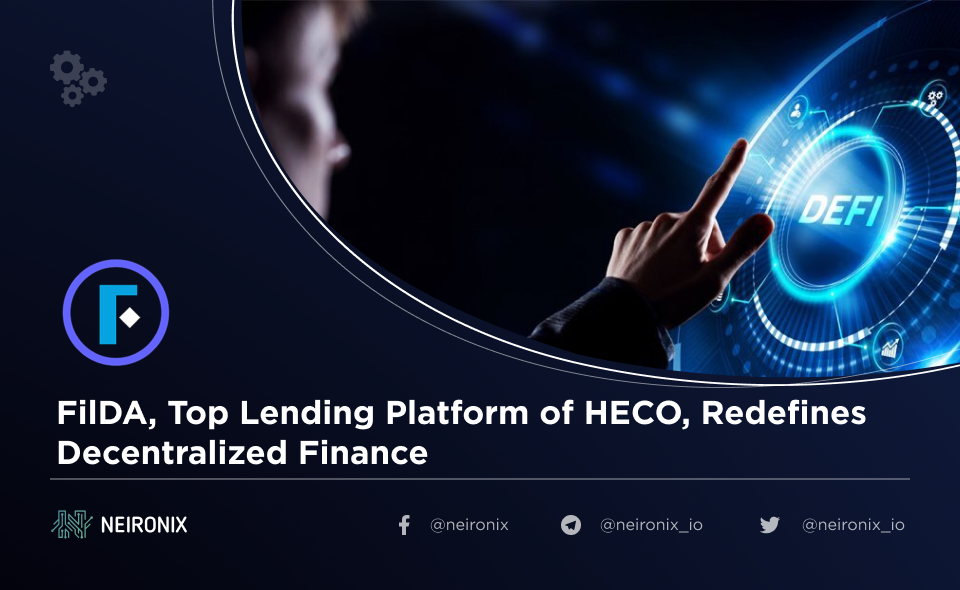 Decentralized finance (DeFi) has developed rapidly and become one of the important trends of crypto digital currency in 2021. Currently, DeFi mainly focuses on lending, DEX transactions, synthetic assets and financial insurance. However, there has always been a huge market demand for lending, and decentralized lending has experienced explosive growth after its feasibility was verified by MakerDAO, AAVE and Compound. The total lock-in amount of loan agreement in the whole network has soared by nearly 50 times from 530 million US dollars at the beginning of April last year to over 25 billion US dollars now.

The peak depositing and borrowing amount of FilDA platform has currently exceeded 2.1 billion US dollars, the peak value of FilDA LP has exceeded 30 million US dollars, with the number of user addresses surpassing 100,000, so the capital scale has always ranked among the top of HECO lending projects. FilDA has been launched on 6 exchanges, including Huobi global, MDEX, MXC and Gate.io. Having been selected as the winner of HECO Gold Creator Prize for two consecutive periods, FilDA is a lending platform of HECO that has been running for the longest time, ranks among the top platforms of HECO, and widely recognized and supported by HECO global users.

FilDA has more features based on the mature Compound protocal. Consisting of the loan agreement, pledge agreement and DAO governance agreement, FilDA runs automatically in the chain based on intelligent contracts, which provides a low-cost and high-efficiency asset conversion platform for the encrypted world. On the FilDA platform, users can gain interest and FilDA by depositing digital assets, obtain FilDA by borrowing digital assets, and acquire FilDA incentives by depositing FilDA single currency in DAO and participating in community governance. Compared with the stable lending rate of Compound, FilDA’s deposit interest rate is generally about 10% higher, while MDX’s deposit interest rate remains above 100%. More importantly, only HECO is available now, but after BSC, ETH and other chains are launched in the future, more assets will enter. Besides, once the scale of lending is expanded, more funds will be attracted and the lending rate will be optimized accordingly.

FilDA always chooses the most user-friendly operation strategy, which is another advantage of FilDA. FilDA’s lending rate is based on the supply-demand relationship. FilDA generates relevant interest rates according to the supply-demand relationship algorithm. The APY of all participants is determined by floating interest rates and mining returns, the former of which varies as the market changes and the latter depends on the number of participants. Therefore, no one can guarantee that APY will remain at a specific value in any period of time, which prevents the interest rate from being too high in a certain mine pool or within a specific time period, providing a fair DeFi environment for users and partners. What’s more, FilDA possesses user-friendly functions such as using Huobi for repayment, saving money to pay back Huobi etc., providing users with the smoothest and most convenient lending products.

FilDA introduced the governance of DAO for the first time on HECO. Whether to change or adjust the variety of currencies, mining parameters and interest rate model of FilDA is decided through DAO voting. This also enables FilDA users to find a group of like-minded friends who can grow and develop together.

FilDA has been defined as a cross-chain lending DeFi project ever since it was born. At its early stage of development, two public chains, NEO and Elastos, were launched. The lending functions of assets in these two heterogeneous chains have been realized. Ecological extension will be further staged on BSC and ETH Layer2. FilDA’s multi-chain deployment plan has been put on the agenda. When FilDA is launched in the other mainstream public chains, the lending scale will be expanded accordingly. Moreover, the lending products are being constantly upgraded as well.

FilDA creates an open, transparent, autonomous and efficient economic ecology in various aspects, e.g. operation, token distribution, community governance and security, which fully guarantees the fairness and transparency of investment and income, so that all participants can experience the great charm of DeFi. Moreover, during this process, FilDA can develop and strengthen itself, while all participants can witness the growth of FilDA and enjoy dividend brought by the development of FilDA. As a consequence, FilDA and HECO will gain a healthier, benign and sustainable lending ecology.

How to participate in FilDA？