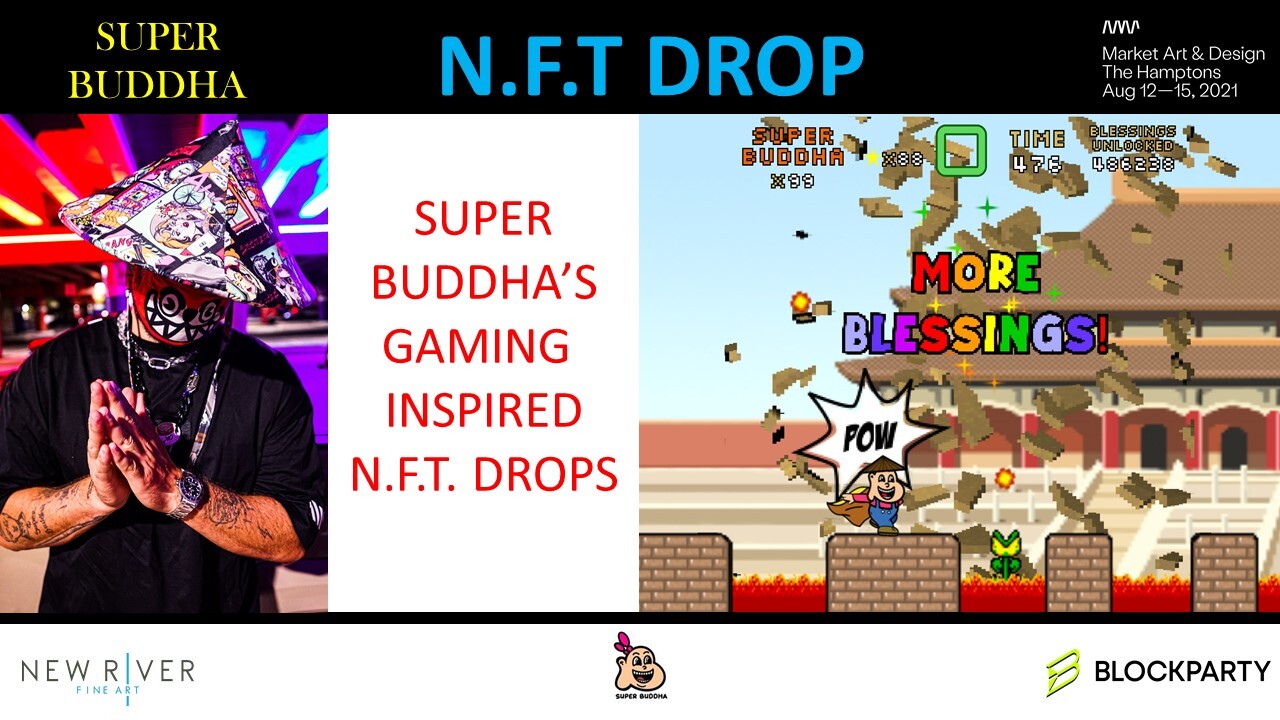 Internationally acclaimed artist Super Buddha, who splits his time between Miami and Shanghai, has garnered quite the star-studded list of collectors, admirers, and advocates.  From musical artists such as Tory Lanez and Swae Lee; to business tycoon, Gianluca Vacchi; and boxing superstar, Floyd Mayweather these celebrities add superstar importance to an already incredible collector-base. Now, fine art collectors and crypto investors alike have the opportunity to collect Super Buddha’s 3 new NFT’s which will drop on Blockparty.co and debut at Art Market Hamptons August 13th with an in-person appearance by the artist.

As a non-native Chinese artist living in Shanghai, Super Buddha began creating art in a hybrid environment of new and old, where the constant influx of Western pop culture influences clashed with the strict and ridged ways of the Hukou System. Coming of age as one of the pioneers of the Graffiti scene in Shanghai, Super Buddha found himself straddling two very distinct worlds ­- the iconic Eastern Art and Urban Art cultures.  Being one of the first artists to tag buildings in Shanghai, he risked life and limb to help establish a new style of Street Art that did not yet exist in this heavily populated area of China.

“On the surface, Super Buddha’s N.F.T.’s are whimsical works of animation full of positive messaging inspired by retro video games. Upon closer examination, the viewer notices underlying narratives influenced by modern advances like cryptocurrencies and blockchain technologies.  Deep within these plots come a more vocal examination and analysis of international political issues like the threat of government interference on autonomous decentralizations, and the consequences of oppressive regimes. In the end, the juxtaposition of good and evil on his signature character, ‘Super Buddha’, reinforces a mental exercise we can all practice – Reject the impulses of materiality while reflecting on life lessons with upbeat gusto.”

These new N.F.T.s flip the script on gaming by animating his 32-bit buddha as a token of enlightenment that brings blessings to retro-inspired video game worlds.  These highly anticipated crypto-native and culturally relevant N.F.T.s by Super Buddha highlight his love for 1980’s and 90’s video game nostalgia and help bring a positive message to the impassioned contexts of gaming.  Super Buddha’s lighthearted artwork features Buddha as a contemporary spokesperson that captivates the audience with witty one-liner blessings.   Exhibited as a repetitive and reductively minimalistic bust of a bubbly cheeked, straight teethed, and large-eyed figure, this bald Chosen One is eternally cheery with his signature long earlobes that symbolize a conscious rejection of the material world in favor of a more spiritual enlightenment.

Ripple (XRP) founder slams US SEC over its crypto ‘clarity’