It seems that the HWiNFO tool is no longer the only software that allows you to check the GDDR6X video memory temperature on Nvidia RTX 3080 and RTX 3090 GPUs. The latest TechPowerUp GPU-Z 2.37.0 apparently also supports the display of the temperature of the hot GDDR6X memory chips and not only that, but also features support and reports the GPU Hot Spot temperature as well. It is interesting to note however that these two features apparently were left unannounced as getting added in the changelog of the latest version that has been released about two weeks ago. Frankly it was by luck that we found out that the GDDR6X Memory Operating Temperature and Hot Spot monitoring support has been introduced in the latest GPU-Z software. 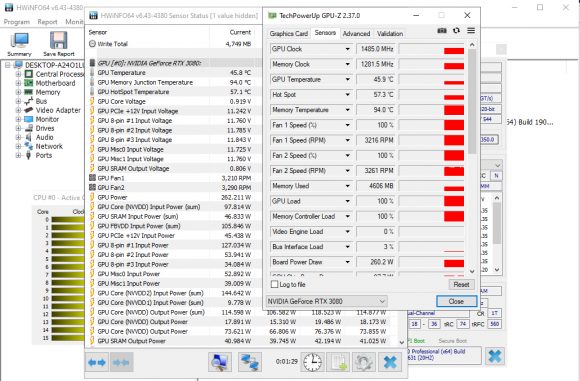 The comparison between the values reported by the two useful tools is inevitable and they report the values for GPU Temperature, GPU Hot Spot and Memory Temperature very close to each other. So, using either of the two programs will be fine in order to get you the needed information. Going for either GPU-Z or HWiNFO will provide you with the data you need to know how hot your GPU and video memory is on GeForce RTX 3080 and RTX 3090 video cards when used for mining. Ethereum mining on these particular GPUs is very popular due to the high mining hashrate they provide, but it also comes at the cost of high operating temperature for the memory chips especially. Keeping an eye on the GDDR6X memory temperatures and the GPU Hot Spots can be useful in detecting possible issues you might have with proper cooling of your mining video cards.

– To download and try the latest TechPowerUp GPU-Z 2.37.0 software…