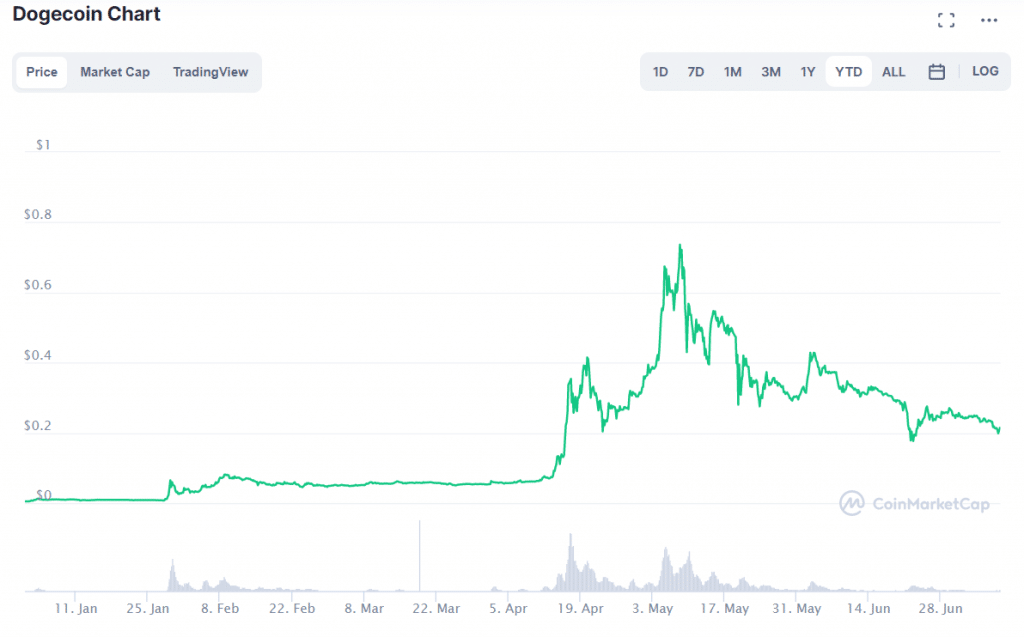 The cryptocurrency market started 2021 on the back of substantial gains in December 2020. The overall market cap of cryptocurrencies jumped from approximately $500 billion to $752 billion in the last month of 2020.

While some of the cryptocurrencies spiked by more than 10,000% in 2021, we have compiled a list of the top cryptocurrency assets which is not only focused on price gains. We have ranked the top 5 cryptocurrencies on the basis of retail and institutional adoption, popularity and market cap.

Started as a joke cryptocurrency in 2013, Dogecoin became the most popular digital currency in 2021. Driven by the Redditt frenzy in January this year, DOGE spiked by nearly 900% within 24 hours on 29 January. Additionally, Dogecoin received support from celebrities, including Elon Musk and Snoop Dogg. In terms of adoption, several global organizations started accepting DOGE as a mode for payments. As of the time of writing, Dogecoin is trading above $0.21 with a market cap of more than $27 billion. DOGE is up by more than 4,500% since the start of 2021.

ETH is the second-most valuable cryptocurrency in the world after Bitcoin. Institutional interest in Ethereum jumped substantially in 2021 as large organizations started adding Ethereum to their balance sheets. According to CoinShares, Europe’s largest crypto asset manager, ETH-related investment products attracted more than $1 billion in the first six months of 2021. Grayscale, the US-based digital asset management firm, expanded its ETH assets significantly this year. The company now holds more than 3.1 million ETH. In terms of price, Ethereum remained the best performing cryptocurrency among the top 3 with a jump of nearly 190% in H1 of 2021. ETH currently has a market cap of $254 billion.

BNB surprised everyone in 2021 with substantial gains. The cryptocurrency became popular among retail traders due to its limited supply. One of the main reasons behind the surge in the popularity of BNB in 2021 is that a record number of BNB tokens were burnt this year. “When you burn coins, they are taken out of circulation forever. It increases the value of the remaining coins,” Binance CEO, Changpeng Zhao mentioned on Twitter in April. Binance Coin started this year with a price level of $37. The cryptocurrency spiked by more than 700% to reach $300 by the end of June 2021. BNB’s current market cap stands at around $47 billion.

In December 2020, XRP lost nearly 60% of its value after the US Securities and Exchange Commission (SEC) filed a lawsuit against Ripple. However, the adoption of XRP Ledger (XRPL) has increased rapidly since the start of 2021. Ripple formed several partnerships with some of the leading cross-border payment firms around the world to enhance the use of XRP in global payments. XRP-related investment products also saw large institutional inflows this year. XRP’s retail demand and the total number of whale addresses have increased substantially over the last six months. As a result, the price of XRP has jumped from $0.22 to $0.60 in the first half of 2021. XRP is the 6th most valuable cryptocurrency in the world with a market cap of over $28 billion.

Despite the reason that BTC lagged behind other cryptocurrencies like Ethereum, XRP and Dogecoin in terms of price gains, Bitcoin received immense support from large hedge fund managers and institutional investors. In February 2021, Tesla, the world’s largest electric car maker, purchased $1.5 billion worth of Bitcoin. Moreover, MicroStrategy and Square increased their BTC holdings during the first half of 2021. CoinShares mentioned that the overall investment into BTC-related investment products in H1 of 2021 has already jumped above the total investment of the entire 2020. According to the latest data published by crypto analytics firm, Santiment, Bitcoin whales holding between 100 and 10,000 BTC now have more than 9.13 million coins, which is the highest level on record. This shows that BTC remained the preferred choice of large investors in 2021.

Bitcoin is still the most valuable cryptocurrency in the world with a market cap of over $600 billion.

Hundreds Of Bitcoin Casinos Have Launched In The Last Two Years