Why 2021 is the best time to invest in Internet Computer (ICP)? 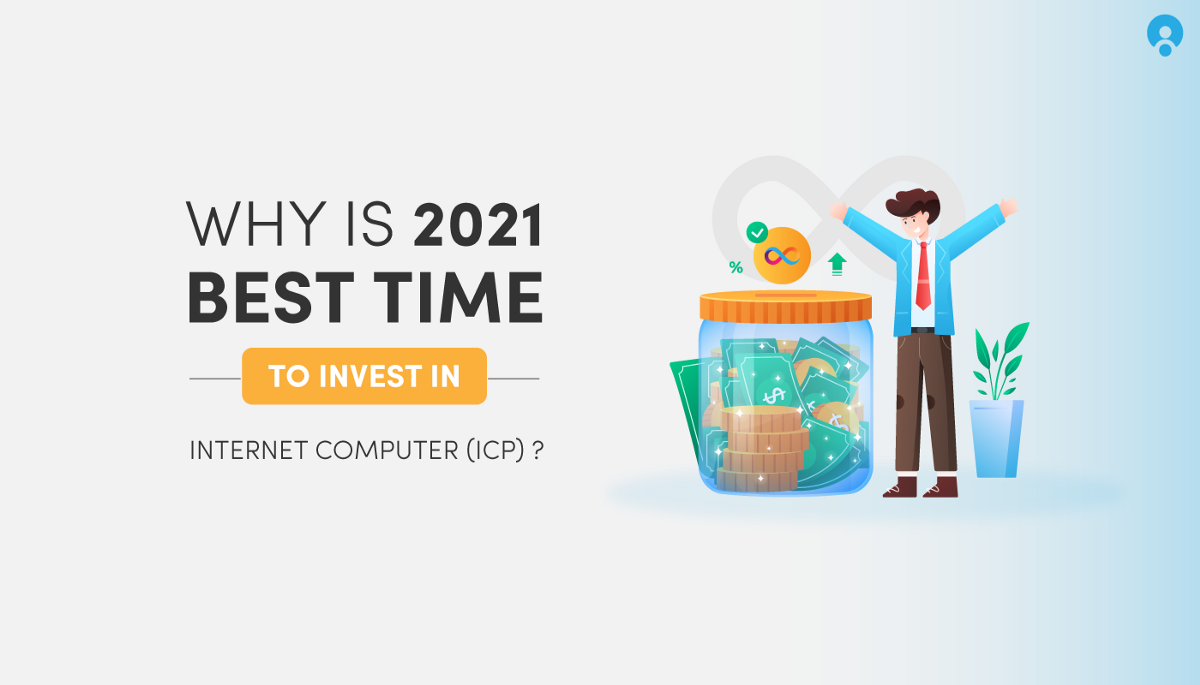 Is the Internet Computer (ICP) coin a good investment?

People are feverishly investing in cryptocurrency, and they are delighted with the profits they are receiving. As a result, it is presently one of the most popular investment methods among the general public. But, before investing, it is essential to understand the specific cryptocurrency in which you intend to invest. There are just a few tokens that can pique the blockchain community’s curiosity. This article will learn about one such project, the Internet Computer (ICP).

What is an Internet Computer (ICP)? Brief Summary

The ICP was created by a non-profit research organization called DFINITY Foundation in Zurich, Switzerland; it is a decentralized blockchain project. Dominic Williams, an entrepreneur and crypto theorist, launched DFINITY in October 2016.

The network is known amongst the masses for creating a simple environment for enabling intelligent contracts while also allowing them to function at Internet-like speeds. Moreover, ICP provides excellent scalability and cost savings, making it ideal for developing mass media services, decentralized banking systems, and other applications.

One of the Internet Computer’s primary aims is to compete with the vast IT companies. We all know that most hosting services are owned by large companies, like Amazon Web Services and Google. These companies can selectively restrict services and modify the rules of operation and platform settings at any time without prior warning to users or businesses. This is why the developers may use The Internet Computer to build their websites, corporate IT systems, and Internet services by putting their code directly on the public Internet; this would eliminate any need for servers or commercial cloud services.

The idea for ICP was revealed in 2016 and instantly piqued the cryptocurrency community’s curiosity. In 2018, the startup firm Andreessen Horowitz and the cryptocurrency fund Polychain Capital invested a total of $102 million in the project, because of which DFINITY later raised $166.9 million. The Internet Computer network went live on December 18, 2020. This particular ICP token was available to everyone on the cryptocurrency market on May 10, 2021, soon after, the currency was listed on BuyUCoin in India.

The new cryptocurrency to hit the crypto world is the Internet Computer. The coin had a dramatic debut in early May and has gotten a lot of attention since then. In little than a month, Internet Computers soared to become one of the most valuable digital assets, with a market cap of $45 billion.

Despite the fact that thousands of cryptocurrencies compete for investor attention, it is remarkable how rapidly Internet computer reached the ranks of blue-chip coins like Bitcoin, Ethereum, and Dogecoin.

One of the reasons why Internet Computer was so quickly snapped up by the market is its uniqueness in comparison to the plethora of other cryptocurrencies.

The new digital currency is being developed by the Dfinity Foundation, a non-profit located in Zurich, and is expected to compete with big fish like Bitcoin and Ethereum. It debuted on May 10th, 2021, with a hefty launch price of ICP $731, making it the 8th most valuable cryptocurrency by market value.

Although the currency sank to less than $150 in minutes, it briefly recovered to around $280 before dropping again.

To start investing in Internet Computer (ICP) and other cryptocurrencies, you must first sign up for an account with an exchange that enables you to buy and sell Internet Computer (ICP) in India. An exchange broker is a website where you may buy and sell ICP as well as other cryptocurrencies. If you want to buy and invest in ICP quickly and effortlessly using your MasterCard, Credit Card, and UPI check out BuyUcoin Exchange!

Prior to the latest crypto meltdown, it appeared to be the ideal time for ICP crypto. Heavyweights such as Ethereum and Bitcoin were at or near all-time highs. Even more obscure currencies, like Ethereum Classic, had had bull runs.

When it comes to ICP crypto, it has proven to be great for anyone with a very short-term trading plan. The value of the Internet Computer token soared from roughly $193 to over $750 in a few hours prior to its placement on Coinbase. However, it only took a few days for the price to fall back below pre-Coinbase levels. Of course, some of that was the frenzy returning to Earth. However, there were other forces at work as well.

The Internet Computer team has set an ambitious objective for itself. However, it is one that many people can support. Too much power is concentrated in the hands of too few individual firms.

However, if ICP crypto is effective, it will help to transform how the internet works. And contribute to reclaiming the internet for the people. And they say that if it isn’t them, someone else will. If you believe the team behind Internet Computer can usher in the next generation of the internet, it is plainly trading at a discount. However, if you believe it is a pipe dream that will never be realized in your lifetime, then no pullback is definitely worth your investment.

Andy Snyder explains why ICP crypto is so tempting

The coin acts as a governance token and way into this new system. This next generation of web technology will allow holders of the coin to directly install their code on the public internet… no need for centralized (and monopolized servers).

Internet Computer Token (ICP) has soared to the top 25 most valuable cryptocurrencies by market value since its public introduction on May 10th, 2021, and for good reason. The Internet Computer is being created by the DFINITY foundation, which is comprised of an exceptional team of encryption and blockchain technology professionals.

Simply create an account and verify your credentials at the BuyUCoin exchange to purchase it. To establish your identification in India, you must present your PAN, AADHAR, and a recent selfie. You can invest in ICP using INR once your account has been created and authenticated.

BuyUCoin is the best environment to trade, sell, or convert your ICP tokens. BuyUCoin allows you to change your tokens to any other supported asset on the platform for free. Also, if you wish to sell your ICP, BuyUCoin makes it simple to get the payment immediately into your bank account.

Internet Computer is without a doubt one of the most promising cryptocurrency projects to have lately been released. The DFINITY Foundation’s team includes some of the brightest minds in cryptography, and the token is supported by well-known venture capital firms. Despite all of the advantages provided by ICP, only time will tell if the protocol can overcome Ethereum as the leading smart contract enabled blockchain.

On the Internet Computer’s network, the token is primarily utilized for processing power on the ICP network. Because the tokens used in these transactions are burned, the token becomes a deflationary currency. There is a total quantity of 469 million tokens, with around 123 million currently in circulation.

With just roughly 14 of the tokens in circulation, there is a possibility that your tokens will be devalued by freshly generated tokens. Internet Computer is currently selling for around $370, which is roughly half of its all-time high price on May 10th. The cryptocurrency has a considerable market valuation of $46 billion.

With a strong team and elite VC funding, ICP looks set up for success. However, it’s important to consider ICP token’s competitors. Ethereum is the largest competitor to ICP, although it has much slower processing times and lower capacity. However, Ethereum’s ecosystem is much more robust, and its network is far more decentralized than Internet Computer’s. — Benzinga Money

Very recently, the ICP token ranked 21th among cryptocurrencies in terms of market capitalization, with a market cap of ₹346,265,185,004 INR.

On the Internet Computer’s network, the ICP token is primarily utilized for processing power on the ICP network. Because the tokens used in these transactions are burned, the token becomes a deflationary currency. There is a total quantity of 469 million tokens, with around 123 million currently in circulation.

The network creates new ICP to reward and incentivize those who play critical roles in enabling the network to function, such as

a) providing voting rewards to those participating in governance,

b) providing voting rewards to those operating the node machines hosting the network, and

Token Supply and Tokenomics in ICP

At Genesis, there will be 469,213,710 ICP tokens. Circulating supply is determined by market dynamics. However, at Genesis, it is estimated to be 26 percent. Allocations of Genesis Initial State Tokens

Here is a collected list of some of their predictions for you regarding the future performance of ICP:

It’s believed that the prices of ICP will decline and may hit $3 by the time year ends. Also, the fees will reduce until it falls below $1 in 2025.

As we know that ICP is a new token, but a big team of skilled professionals. The project’s goal is to tackle particular and rather global Internet challenges. If the makers can work upon the target set by them, the value of ICP is bound to skyrocket. ICP is a sound investment. It is an extremely ambitious project with excellent computer scientists and a million-dollar investment from Marc Anderssen (creator of Netscape) and other major investors.